You have deployed/installed a validated pattern using the instructions provided for that pattern. This should include setting having logged into the cluster using oc login or setting you KUBECONFIG environment variable and running a make install.

Any validated pattern that uses HashiCorp Vault already has deployed Vault as part of the make install. To verify that Vault is installed you can first see that the vault project exists and then select the Workloads/Pods:

In order to setup HashiCorp Vault there are two different ways, both of which happen automatically as part of the make install command:

An example output is the following:

The vault’s root token is needed to log into the vault’s UI and the unseal keys are needed whenever the vault pods are restarted. In the OpenShift console click on the nine box at the top and click on the vault line: [ 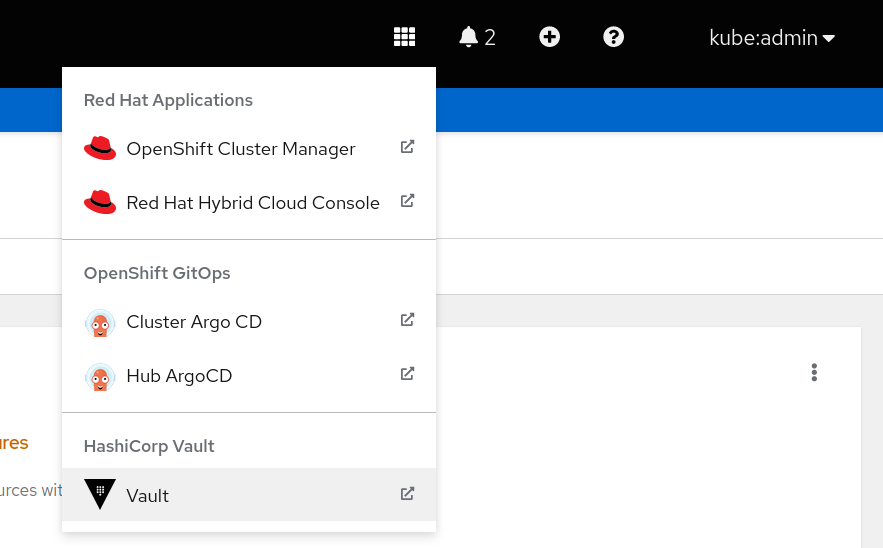 Copy the root_token field which in the example above has the value hvs.VNFq7yPuZljq2VDJTkgAMs2Z and paste it in the sign-in page:

After signing in you will see the secrets that have been created.

If you don’t see the sign in page but instead see an unseal page, something may have happened the cluster and you need to unseal it again. Instead of using make vault-init you should run make vault-unseal. You can also unseal it manually by running vault operator unseal inside the vault-0 pod in the vault namespace.

Check with the validated pattern instructions to see if there are further steps you need to perform. Sometimes this might be deploying a pattern on an edge cluster and checking to see if the correct Vault handshaking and updating occurs.